Wshp systems are divided into 2 groups as Closed Loop and Open Loop Systems. Closed loop systems involve the energy exchange of the water circulating in the pipes by piping on the source side (soil / lake / river etc.).

Open loop systems are systems in which we use spring water directly. Energy is shared through a heat exchanger.


Thanks to its ability to store heat very well, the soil is the most efficient heat source. Energy transfer with the soil is provided by the water circulating in the pipes placed under the ground. Water-to-air or water-to-water heat pumps can be used. The piping metric calculation to be made on the soil side depends on the thermal conductivity value of the soil. In other words, the moist / wetter the soil is, the more efficient the system will be and the lower its initial investment.


The investment cost is lower than vertical piping. However; It requires more space and is applied where the land allows. Horizontal piping solutions are called spiral, slinky and helix according to the positioning of the pipes. Deeper than 1 meter is excavated in the ground and the pipes are placed and covered with the soil removed. HDPE type pipes are used.
Sample Applications: Gallipoli Hotel-Çanakkale; Öcalgiray House-Düzce 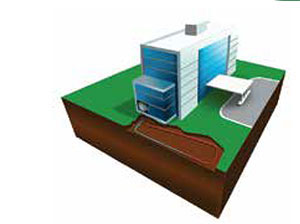 
Drilling has the most efficient performance in ground source systems. After about 5m depth in the ground, ground temperatures are around 16-17C summer and winter. Due to the cost of drilling, the investment cost is high and requires detailed engineering work. U type HDPE pipes are placed in the drilling wells. Average drilling diameter is 15-20 cm and drilling depth is between 100-150 meters. A certain distance should be left between wells.
Sample Applications: Meydan Shopping Center-İstanbul, İller Bankası-İstanbul, Mesa Çengelköy-İstanbul


These are the piping systems where heat transfer is the most efficient and economical. Pipes are placed spirally into the lake, river or sea.
Sample Applications: Carya Golf Resort- Belek 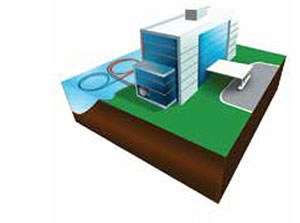 
Groundwater or lake-river-sea water is used directly and energy is transferred to the system through a plate heat exchanger. Since there are very high efficiency systems, if there is a water source available, it should definitely be evaluated. The return period of the investment cost of the system is generally less than 1 year.
Sample Applications: Terracity AVM-Antalya, Adanapark Mall-Adana, Özdilek Shopping Mall-Eskişehir Robinson Golf Hotel-Antalya 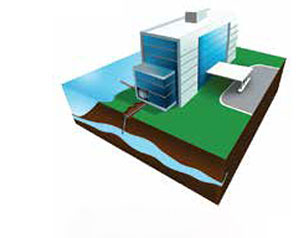